What Do We Make?

We develop original industrial inkjet
printers and cutting plotters and
supply them worldwide.

MIMAKI is a development-driven company that provides integrated services through the development, production, marketing, and maintenance of products such as industrial inkjet printers, cutting plotters, and inks.

Besides printers, we provide original ink and software products that deliver added value to printers in an integrated manner.

Many large outdoor signs like this are created on our printers.

What is an industrial inkjet printer? 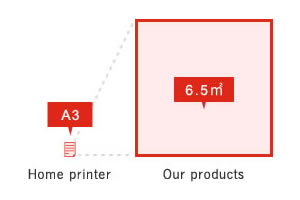 In contrast to ordinary inkjet printers for use at home, our products can print onto sheets that are 6.5 square meters (70 square feet). 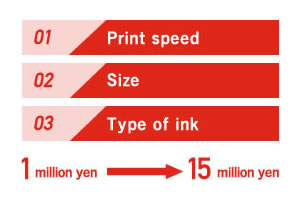 We offer a variety of printers ranging in price from 1 to about 15 million yen, depending on the print speed, size, and type of ink used. 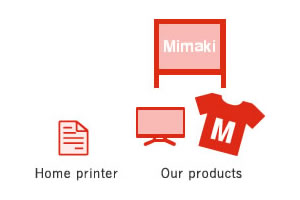 Whereas inkjet printers for use at home print only on paper, our products can print on a wide variety of materials, including plastic, glass, wood, and fabric. The ability to print on materials besides paper is what creates added value in deliverables, and this is why our customers use MIMAKI printers for industrial uses in their businesses. 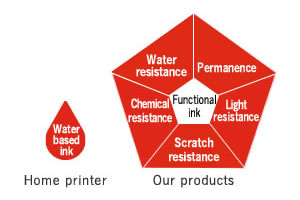 Inkjet printers for use at home use water-based ink. In contrast, we have developed a wide variety of original inks suited to different materials. Our independently developed functional inks do not fade, even outdoors, do not run with water, and do not rub off. Customers support us, because we support them with comprehensive offerings including ink as well as printers. 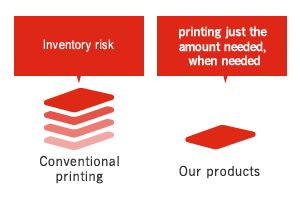 Inkjet printers are digital printing systems that do not require printing plates. They enable digital on-demand production—printing just the amount needed, when needed—with no need to spend time and money on making printing plates. They are becoming quite popular in industries as a solution that meets diverse needs by enabling small-lot production with a quick delivery time at low cost. 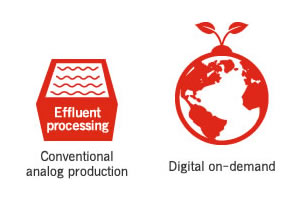 Since they discharge ink only on the design portion, inkjet printers require only a small amount of ink to print. They also eliminate the environmental impact of processing effluent from plate washing. With such superior environmental performance, inkjet printers show promise as an ecological production system that meets the needs of the times.

Sophisticated design and customizability allow prices to be set many times above cost.
Our products create added value by providing customers with satisfaction beyond price.

With an industrial inkjet printer, the materials printed onto are special (e.g., plastic, metal, wood, fabric), and so the inks used are also special.
One of our major strengths is the accumulation of head control technologies that ensure beautiful printing. This is done by discharging the special functional inks in a stable manner and employing chemical technologies for the proprietary development of diverse inks suited to different materials. 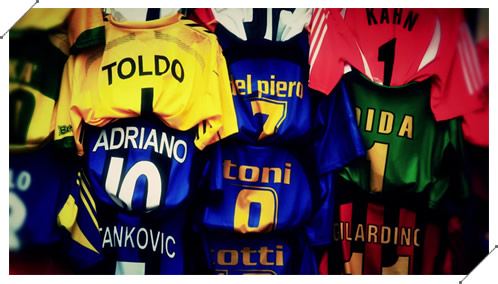 What is a cutting plotter?

Nowadays, in line with the widespread use of industrial inkjet printers, towns and cities are full of vibrant signboards colored with photographs and illustrations. Until the 1980s, however, the majority were simple signboards that used only lettering hand-painted by artists.

A cutting plotter is a machine that can cut out any shape on films just as designed on a computer. The ability to cut out lettering on film and paste it on signboards played a large role in digitalization, from signboards hand-painted by artists to cutout lettering signboards based on computer control.

Cutting plotters made the experienced skills of artisans unnecessary and significantly increased outdoor weather resistance, as film does not fade for several years, whereas paint fades after only a year.

MIMAKI’s first cutting plotter, which was launched in 1987, was the first in the world developed to use the eccentric cutting method that applied the caster principle. It received tremendously favorable reviews in the market, since it could even cut kanji that had a lot of strokes without raising and lowering the cutter. Thanks to its cutting plotters, MIMAKI’s products began to obtain the confidence of signboard producers.

Even today, when graphical signboards made with inkjet printers have become mainstream, MIMAKI’s cutting plotters continue to be used at signage production sites around the world as an indispensible piece of equipment. 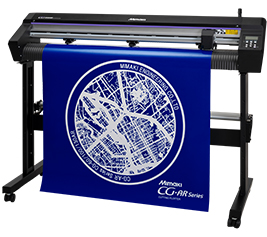 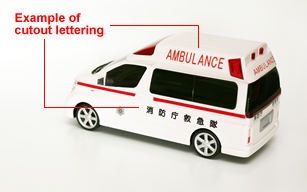 Even now, cutout lettering is used in many places.