A departure ceremony was held for two trains on the Ueda Electric Railway Bessho Line with full-body wrapping—the "Maruma-Dream train" and a new 6000 series train.

The "round window train" was the nickname of a De-Na 200 electric tramway train manufactured in 1928 that operated on the Ueda Electric Railway Bessho Line until 1986. It was known as the "round window train" because of oval windows in the door boxing. The training remained popular even after retiring and made a reappearance as the wrapped "Maruma-Dream train" in 2005. However, after about 10 years, the first generation of Maruma-Dream train was retired in 2014.
Many people lamented the train's retirement, and it has now been revived in a second generation.
MIMAKI has been a special sponsor of the train since it was first wrapped, using an inkjet printer to print onto special media; the printed film is then wrapped around the train.

The 2016 NHK Taiga period drama, a popular historical TV drama series in Japan, will focus on the Sanada clan, which ruled over present-day Nagano Prefecture, during the tumultuous period of the late 16th and early 17th centuries. In connection with this, the train was wrapped in red (the color of the Sanada clan) with gold highlighting the Sanada family crest of six one-mon coins. The wrapped trained was nicknamed the "Sanada Dream Train" on June 13, 2015 following a public solicitation of proposals. The wrapping was printed on a MIMAKI printer and wrapped over the entire train.


Scenes from the departure ceremony 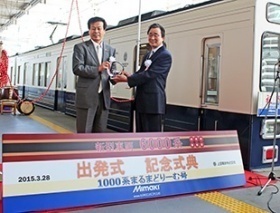 MIMAKI President Kobayashi receiving a letter of appreciation from Mr. Motai, the mayor of Ueda City 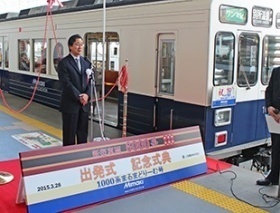 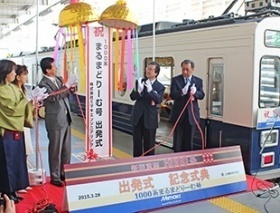 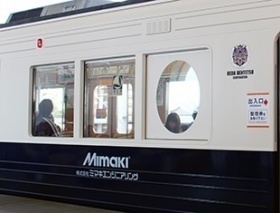 One of the round windows that gave rise to the nickname 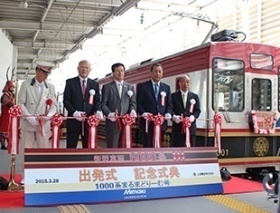 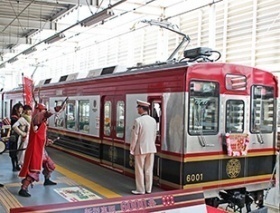 See the Ueda Electric Railway website (in Japanese) for information on schedules of the "Maruma-Dream train" and "Sanada Dream Train."


Special sponsorship of the Reappearance of the Bessho Line’s Special Round Window Train, a local revitalization project (since January 2005)

Together with Ueda Electric Railway, MIMAKI is a special sponsor of the Maruma-Dream train, which is a reproduction of the Bessho Line’s round window train. The exterior of the current train has been wrapped in a print that reproduces that look of the round window train in 1986, when the train was retired. 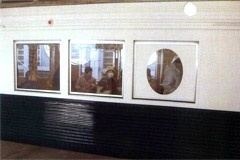 Wrapping is a method whereby printed film is affixed over the entire train. The current wrapping has a cream color above with dark blue below, recreating the round window train’s two-tone coloring.
Additionally, stickers were affixed at four locations on each car to make the round windows.

The sight of the train, with its soft coloring, blends comfortably into the rural landscape of the Shiodadaira area of Ueda City, helping to attract tourists to the region.

Pictures of the old round window train can be seen at the Ueda Electric Railway website (in Japanese).