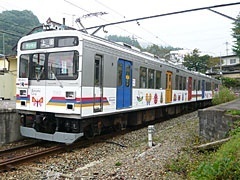 Along with Uedadentetsu Co., Ltd., and the Taizi Harada's World in Ueda Planning Committee, MIMAKI is a special sponsor of the "Nature and Friendship" wrapped train on the Bessho Line.

This is one of the ways in which Ueda City is being promoted in and outside Nagano Prefecture as a city where a nostalgic kind of Japanese landscape lives on. Illustrations made by Taizi Harada, who is known as a landscape artist, on the theme of "nature and friendship," were printed on film, which was then wrapped (pasted) onto the sides and front of a train.

The sight of the wrapped train running through rural landscapes gives people who see it a feeling of warmth and tranquility.

Taizi Harada is a landscape artist who uses a simple touch in painting disappearing Japanese landscapes and the lives of the people who live there, gathering material from across Japan on the theme of "Japanese home towns." He was born in Suwa City, Nagano.